The U.S. Army wants to be more “sustainable.” Is this a new recruiting strategy? Well, there was no point in “going green.”The truth: Turns out the Army thinks efficiency is more than just (as Vice President Cheney once condescendingly dubbed it) a sign of “personal virtue.” The Army has come to see energy efficiency as a matter of life and death.

The Army’s move to more efficient ways came out of the Iraq insurgency’s roadside bomb (Improvised Explosive Device, IED) attacks on convoys in the 2004 through 2006 period. The more energy efficient the Army became, the fewer fuel supply convoys were required. The fewer the convoys, the fewer the soldiers killed and maimed by IEDs.

Tad Davis, deputy assistant secretary for environment, safety and occupational health, U.S. Army: “If we can reduce consumption on our forward operating bases by using renewable energy, let’s say wind or solar instead of a diesel generator outside the tent … then we can reduce the number of these supply convoys that need to come forward that are getting hit by these IEDs…”

So the Army turned to base wind installations and battlefield solar materials and started using biodiesel in its generators. (See GREENING IRAQ THE HARD WAY)

This offers (finally) a solution for how to drive Middle America to higher levels of efficiency: Line suburban commuter routes with punishing explosives.Not all that funny a joke. Sorry. But there IS an analogy with what the Army has gone through and where Middle America must go.

After the Army started using New Energy, it realized the best way to improve energy use was to improve energy efficiency. It found a foam insulation surface spray and cut power consumed cooling forward desert bases in half.

Just like the U.S. Army, saving what New Energy guru Amory Lovins of Rocky Mountain Institute calls “negawatts” is what Middle America can do most immediately and most effectively to ease the current energy crisis. As the Army discovered, the watts that don’t get burned are the cheapest watts of all – and none of them are imported.Efficiency isn’t glamorous. Often the most important ideas aren’t. But efficiency is the single most patriotic thing any citizen can attend to. Don’t take NewEnergyNews’s word for it – ask the Army.

The Army is also moving to lightweight yet stronger and more durable carbon nanotube vehicle materials. An electric or plug-in hybrid electric Humvee is in the works.

WHAT
The Army is taking aggressive steps to decrease the generation of greenhouse gas emissions (GhGs), i.e., to reduce its “carbon bootprint.” 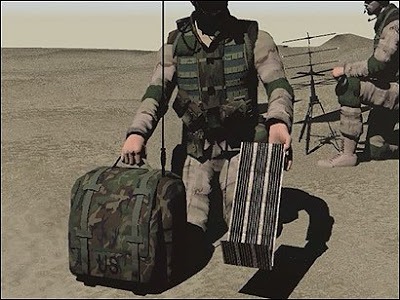 WHY
– First changes toward sustainability: changing training ranges. Fort Bragg mock towns and villages used in combat training were ~$400,000 to build. Now, made of recycled truck-sized shipping containers, they cost ~$25,000 and the shipping containers do not go into waste.
– 85%+ of power at forward bases was used for air conditioning in (poorly insulated) tent sleeping quarters and to keep communications equipment cool in (poorly insulated) temporary buildings. Foam insulation sprayed directly on tent and temp building surfaces cut energy loss 45%.
– The Army is now studying advanced carbon nanotube vehicle materials that sacrifice nothing in strength or durability but are dramatically more lightweight for next-generation Humvees or Bradley fighting vehicles.
– The Enviance program shows that Fort Carson emits 205,000 tons of GhGs/year, the equivalent of a town of 25,000. 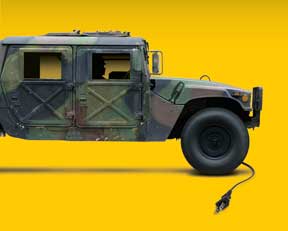 PHEV: Plug-in Humvee Electric Vehicle. More of these and we wouldn’t have to be there to begin with. (click to enlarge)